Warsaw was not what I expected, in terms of Architecture, in terms of food, in terms of everything. Yes, there are still huge concrete buildings to reflect its past but there are also beautiful colourful buildings and ornate architecture one would not associate with Poland. The grey and grim city it once was is no longer the place it is today.

Warsaw and its History

Warsaws tallest and most controversial building is its Cultural Centre, a gift from Stalin. Apart from its checkered background, it does, however, act as a centre point, a site for tourism and a stunning view up top making it a skyscraper to compete with. A symbol of change for the city. 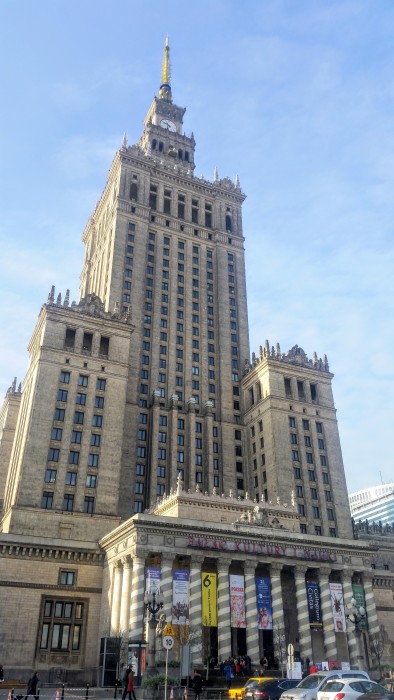 Across the city, you can see numerous types of architecture periods popping up, from gothic to renaissance, to classical and baroque. Along the main road, which is pedestrianised, Krakowskie Przedmiescie, it is easy to see these styles, whilst taking a picture or two.

Warsaw and its Colour

As you walk into the city centre you are met with a burst of colour. An array of colour awash all around you, bright reds, yellows, blues and greens bursting from the shops, enticing you, almost like pastel sweets.  These buildings were once grey and grim and represented communist Warsaw, but in order to change the negativity associated with the regimented way, pastel is the way forward.

Warsaws most modern building has to be the Jewish Museum, the Polin. Built in the ghetto of Warsaw stands this iconic and stand-alone building. A mark for a change that has come to Warsaw.

It is no surprise that the most ornate structures would be that of its palaces, churches and educational establishments. displaying a richness of colour and architectural details.

View all posts by archtrove

This site uses Akismet to reduce spam. Learn how your comment data is processed.

#Stained #Stunner
#Peaceful #Petra Tbt last year and travelling to Jordan. The Treasury is probably the most photographed place in the whole of Jordan and before visiting I thought is it really worth it. But yes, yes it is. A beautiful carved out masterpiece among the rocky and mountainous landscape. 😍😍😍
#Awesome #Artwork Spotted at Reyjavik Airport. Not sure why its there but love a good graphic design piece. #marvellover
Capturing #Awesome #Angles ❄ Different angles give you different perspectivecon what you see. Remember to look, you'll never know what you might see. ⬆️
#Best #Building in Iceland ❄ ⛪ Has to be this brutalist structure. Iconic and standing loud and proud for all of Iceland to see.
#Icy #Iceland ❄❄❄❄ Feeling festive, christmassy and happy in beautiful city of Reyjavik. A city with minimal amounts of sunlight in the winter months so capturing glorious shots like this one are a treasure.